The first weekend of June, I took the opportunity to join in on one of MY FAVORITE rides……..Parowan Gap!  Living and training in Iron County for many years, I loved riding in the Western Valley.  It is flat and fast and WIDE-OPEN!  For years there has been a small “Tour de Gap” event in conjunction with the Utah Summer Games, and this year it expanded to a Century ride with a new name and race management.  Century rides aren’t really races (most of them at least).  This was one of those un-timed rides, that is well-supported and well-organized AND PERFECT for a great long day of riding.  A few of us from the Southern Utah Triathlon Club decided to head up together and enjoy a beautiful day out of the heat of St. George.

We started in Parowan and headed into Cedar City before turning back out into the Western Valley to Minersville.  The group was HUGE when we started out.  The ride from Parowan to Cedar City is mostly downhill and the group didn’t spread out at all.  Being a triathlete we don’t ride well with others 🙂  No….We love to ride with others.  It is just that we don’t paceline like the roadies do and so this is VERY different from our normal riding environment.  I loved it.  The energy was great and we were flying down the road………That is until the SAG/Lead Car decided to slam on his breaks to talk to someone driving in the other direction.  SERIOUSLY!  He almost took out 150 riders.  He slowed down to a stop and all of the bikes behind him had to lock up their brakes.  After this little incident, I couldn’t wait to get out of the group and onto the open road. 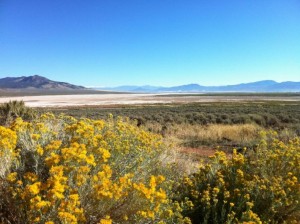 That beautiful valley West of I-15

We looped through Cedar City and Enoch and were quickly headed back north towards Parowan Gap.  I was riding with some other friends in the front paceline.  The speed and intensity was amazing.  The guys in the front were GREAT riders.  The only problem was that the they just kept going faster and faster and faster……..I knew that I was going to need to stop to use the bathroom and fill my bottles at the next rest stop, so I decided to just drop off of the paceline.  It was the best decision I made all day 🙂  When I dropped back, so did my friends……..all grateful that SOMEONE finally waved the white flag in surrender 🙂

We stopped quickly and were back off climbing into Minersville.  Of all the miles I have ridden in this valley, I had never ridden into Minersville.  It turned out to be the PERFECT climb for me!  It was not necessarily steep, but climbed and rolled up to about 6500 feet in elevation before a steady descent into Minersville.  Nothing technical.  Nothing tricky.  Just perfect.  As we started to get to the top of the first climb, I realized that my legs may be feeling a bit better than some others in the group.  As we descended the group actually broke up a bit, but we were able to regroup when we hit the turnaround.

I knew we needed a good group for the second half of the climb back to Parowan Gap.  The climb on the back-side was steeper and we would be turning into a headwind.  There were five of us who took off together.  By the time we were 1/3 of the way through the climb, the group was down to 2.  I was so happy to be with my friend Craig Egerton from Cedar City!  He is an AWESOME rider and one wheel that I would stick to on any ride. 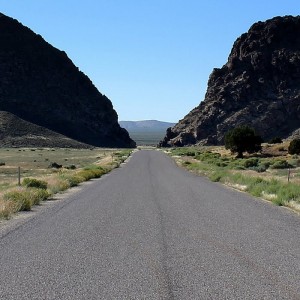 Craig and I continued to the Summit, but Craig admitted he wasn’t feeling quite as perky as I was.  Just before the Summit he fell back.  I figured I was better off just doing my thing and not pressuring Craig to over-extend himself.  I rounded the top of the hill and began the beautiful descent back into the open valley.

I hadn’t ridden long since Ironman St. George.  I was so happy to be feeling INCREDIBLE.  I was in a head-wind on the descent, but felt strong and smooth.  The wind wasn’t enough to be difficult to manage.  It stayed in one direction and I just stayed out of it as best as I could.  I just hammered into Parowan Gap.  I couldn’t believe how great I felt.

I hit the last rest stop at about Mile 85, filled my bottles and was off.  I couldn’t see anyone behind me, so I just kept going on my own.  Riding through the Gap got a bit tougher. It is a false flat that felt so much slower than the road I had just come off of.  It was also getting warm.  I knew that the false flats would last until I finished, so I just wrapped my head around them and rode it home. 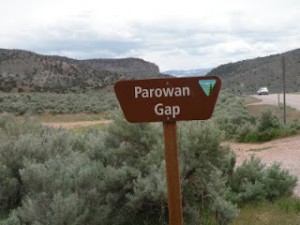 I finished with a ride time of 4:32 and total time of about 4:45.  By far, the fastest century I have ever ridden.  I felt so good!  I had hoped to run a few miles after the ride, but wasn’t able to get to my shoes in the back of my friend’s car.  I opted for the dutch oven potatoes instead 🙂

All in all, it was one of the most fun days I’ve had on my bike this season.  It was good to get out and ride well and have a great time in a low-pressure event.  Thanks to SpinGeeks for putting together a GREAT event!  This will definitely be on my calendar for next year!