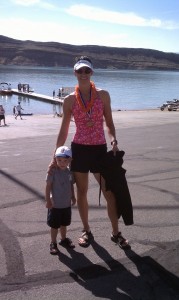 Jake and I at Quail Lake After the Swim

Being back to good health again after a week-long bout of the stomach flu, I was itching for some competition.  I didn’t have many options, but there was one event that I had never participated in before that was set for June 4th, The Kau Wela Open Water Swim Competition.  I have never done a swim only event.  I figured I couldn’t give up a chance to get in the open water in a race situation, especially when it was right down the street and only cost $15!  Now that is a deal!  More races need to be $15 🙂

All I knew about this event was that it included a Beginner’s Open Water Triathlon and a few different swim-only distance races.  It is a small event that has only been running for a few years.  This year they moved the event from September, to June.  The water temps have been perfect down here in Southern Utah and the weekend forecast was BEAUTIFUL!  I figured I would bring the kiddos, get in a nice swim and then head to Cedar for some riding later in the day.  I’m so glad I did it!

There is something about small events that I just love……even more than the fact that almost everyone wins something.  They have their quirks and share of problems, but, they are pure to the sport.  Everyone is there just having a good time and enjoying whatever is being thrown their way.  I signed up for the 1 mile swim with only 11 other competitors, 2 of them female.  I didn’t know everyone, and had a chance to meet some new faces.  It was great.  There was even one super fast ex-Olympian who didn’t wear a wetsuit.  He is clearly more of a man than I am, as I was donning my long sleeved wetsuit 🙂 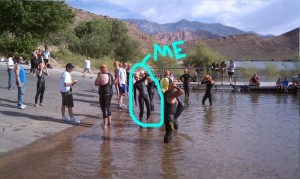 The course was a double out and back and marked with large yellow tubes (like the ones you would sit on to be pulled behind a boat).  The problem was that they were pretty flat to the water.  It is already tough spotting into the sun on these morning swims, but it was even more difficult trying to locate “small, flat” markers in one breath.  Let’s just say, I didn’t swim straight.  When the kayak pulled up beside me at one point, I realized I had better move more to the other direction before I hit the dam.  I had a new pair of goggles I was debuting and they needed a bit of adjusting as well.  I have to say though, the most memorable part of this swim, was when I rounded the second-to-last marker and got completely tangled in the rope anchoring it down.  As I screamed and struggled to remove the rope from under my armpit and around my neck  there were plenty of giggles from the people on the boats.  I was really stuck for a few seconds and was not so sure what it was that had entangled me.  I know there are no octopuses in Quail Lake, but you never know 😉

I came in with a ssssslllllllooooooowwwww time of 31:42.  (I’m hoping the course was long.)  All-in-all, it was a great swim.  I can never pass up an opportunity to get in the open water.  It is so different from the pool and it is also something that isn’t really recommended to be done solo, making chances for workouts kind of tough.  Luckily, we live close to two awesome reservoirs and have a very active tri-club that does weekly workouts.  (Check out the Southern Utah Triathlon Club.) 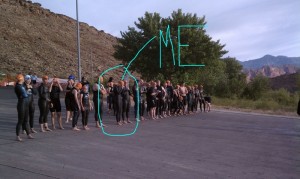 Getting a head count before we all hit the water.

I will never put myself out to be an amazing athlete in the water.  It is something I’m working my butt off to improve.  I can hold my own for long enough to make up for most of my water short-comings on the bike.  But, that is what triathlon is all about. You can’t just be good at one sport.  You have to be good or at least pretty-good at all three.  I call it the great leveling ground.  You can’t be a swimmer.  You can’t be a biker.  You can’t be a runner.  You have to become a TRIATHLETE!  I’ll take on any “swimmer” in a triathlon, as long as they aren’t also good bikers and runners………All three is a deadly combination 😉