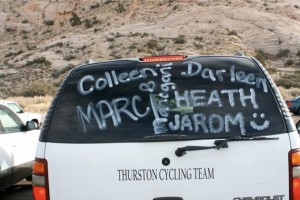 Relays are the new “hip” thing in running races!  Everyone can join a team.  Fast, slow, veteran or newbie.  There is a place for EVERYONE in a relay.  You cram a team of 2 to 5 teammates into one vehicle and run your little hearts out.  Expedition St. George 2010 was the first time I had run in a relay and had the time of my life.  I loved the 50 mile distance because it takes about 6-8 hours, which means you don’t have to sleep in a van wearing sweaty running clothes (like the long distance events of 100+ miles).  So when Coach M (Mahogani) said that HT Training was going to get together a few teams for this December’s event………..I WAS IN! 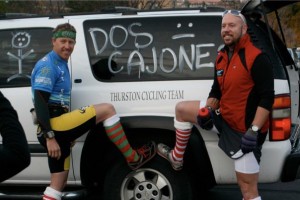 We created two teams:  Dos Cajones (look it up if you need translation) and Spare Tire.  Dos Cajones was the Thurston Boys, Heath and Jarom who would run as a 2-man ultra team.  Spare Tire was as an all female team composed of Marci Simons, Darleen Loch, Mahogani and myself.  Mahogani has one leg on the injured list, so her plan was to only run one leg (Ha!) and the rest of us would run 3 legs a piece.  I was happy (so I thought) to run as much mileage as possible, and ended up with legs totaling just over 18 miles.   The Cajones and the Tire were sharing the same race vehicle so it made for some interesting CRAZY driving!  Special thanks to Mom and Dad Thurston for the Suburban……Sorry about the lingering stink……It’s all Jarom’s and Heath’s fault! 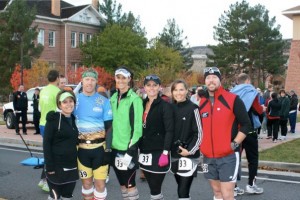 Last year Adam and I were on the same team sponsored by the Spectrum and he ran again this year with this group.  It made for some fun competition between my “0ld” and “new” teams and a GREAT day all around for Adam and I to get out of the house for a day of running TOGETHER!  Special thanks to Grandma and Grandpa Rue for watching the coughing kiddos!

Heath started out the Cajones running the first three legs.  Marci started the Tires off, followed by Darleen and Mahogani.  Leg #3 is a KILLER climb up Snow Canyon State Park.  The Thurstons hammered their way to the top of this leg!  For having a bum knee, little Mahogani sure chugged her way up those steep climbs! 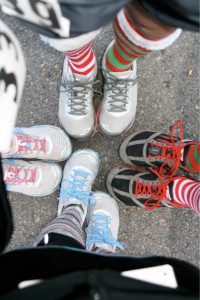 At the top of the Canyon Jarom and I took over for the 7 mile descent back to St. George via SR-18……..The running trail, not the road!  If you know anything about this trail you know it wasn’t put there for running and if it was…….it was created by the DEVIL!  Leg #4 descends fast and furiously, all the while climbing short and steep sections where running helps you no more than walking would.  Jarom and I both knew that running this leg conservatively was important.  If not, we would be paying for it later in the day!  As conservatively as I needed to go, I heeded no warning and ran my little heart out.  It felt good.  I was going downhill!  I ticked off the 7 miles in just over 51 minutes with a 6:59 average.  Yup!  Too fast!

At the bottom of the hill Jarom kept going and Darleen took over for me running through downtown St. George.  Mahogani and Marci came back to me after dropping Heath off at his exchange (at this point the Cajones were blazing ahead of the Tires).  We went back and dropped Marci off at her starting point and drove back to find Jarom and pick-up Darleen.  (Whew…..Nice driving Mahogani!).

We found Jarom and he told us his sad story of getting lost on his leg and having to be corrected by another team vehicle, going about a 1/4 mile out of his way.  Bummer!  Darleen finished with a BLAZING time and piled into the car pronouncing that the leg was “So well marked.”  Jarom sunk into his sweaty back seat in shame.  Ha!  Ha! 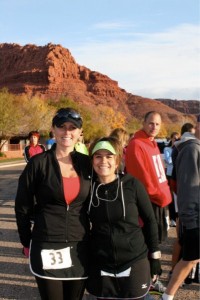 Love this pictures and love these FAST ladies!

Heath and Marci jetted down the riverside trail on the beautiful Leg #6.  Heath and Jarom were rocking the course and seemed to be in 1st or 2nd place in the ultra division and close to the top ten of all the teams combined.  Spare Tire was holding on to about 15th place overall, running close behind the other fast ladies out there.  Heath continued through to Leg #7 and Marci handed off to me. 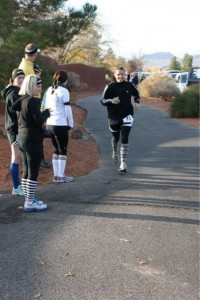 Darleen tearing it up! What an awesome lady?!?!

Leg #7 made its way out into Washington Fields via the longest and straightest roads ever created!  This was a mentally challenging leg for me (and I was glad that Heath confirmed the same feelings).  There was a bit of wind in my face and I was ENTIRELY alone the whole leg.  I ran hard up and around the steepest hill of the leg only to find all the other straightaways either so flat I still felt like I MUST BE going up hill or ACTUALLY going up hill!  Either way……..I was pushing fairly hard, but maintaining a strong 7:20ish pace.  I was just glad to finish the leg since I could see the finish coming from a mile out!  Ugh!  Hate that!

Darleen took over to finish off the “Fields” legs with another challenging 5 miles.  She rocked it and pushed through the dirt and the hills to hand off to Marci who would run us to the Arizona border.  Heath handed off to Jarom after the deathly Leg #7 for Jarom’s last two legs of the day. 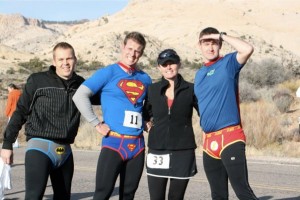 Marci loves her men in UnderRoos!

Leg #7 was a long, almost 6 mile leg along the Arizona border that would bring us back to town and the final Leg of the day.  Marci did great out in the lonely desert and even though Jarom started to struggle with an angry hamstring both finished strong.  Heath and I took over to run the teams home on Leg #10.

All day long Team Spare Tire had been in the shadow of “Passing You Like a Deadline”, Adam’s Team.  It would come down to Adam and I on Leg #10.  Let’s just be honest for a minute……….I’m a MUCH faster runner than Adam (right now, at least…….he has a TON OF potential.  If he ever chooses to unlock it…..I’m in BIG trouble!).  Adam’s teammate passed Marci on Leg #9 and got them at least a mile headstart into Leg #10 on me.  I WAS ON A MISSION!  Marci tagged me through and I pushed and pushed to catch Adam. 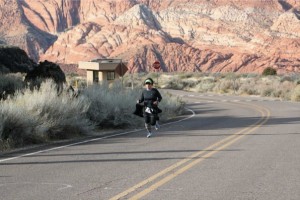 With views that like she didn't even notice the hill.

I started out the leg running about a 7:00 minute mile and knew that it was too fast.  I was tired and approaching 18 miles for the day.  I haven’t run that much distance since the Ogden Marathon in May.  I had been well-trained through the summer for the half marathon distance, but this was definitely pushing my abilities………not to mention I have been heart rate training (i.e. running slowly) for 4 weeks now!  I hit the river trail that would lead us to the Dixie Center, the finish, and just tried to hold on. 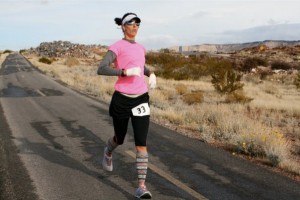 This must be the face I make when my quads are about to explode!

It was finally getting warm and all I wanted to do was to take my shirt off.  Not going to happen!  My Garmin was too big, my visor too wide and my pace too fast.  I pulled my shirt up to expose some skin in hopes of cooling myself down a bit.  I was starting to overheat (after FREEZING all day!).  I rounded the final corner and saw a flash of Adam’s orange shirt just exiting the final bridge.  I was close………but not close enough and too close to the finish.  I held on for dear life and saw Adam make the final turn off the trail to the finish line.  I wasn’t more than a minute and a half behind him (remember he got at least a mile headstart on me).  I dug deep and ran it in to the finish being joined by all the Spare Tire ladies as we entered the chute to the line!  SO FUN! 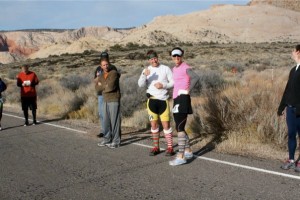 What a day?!?!  I can’t wait for the next relay!  These are GREAT events.  St. George City did an AWESOME job restructuring this race after many of the trails used in previous years were washed away by last year’s floods.  I think I actually like this new course better!  I couldn’t have asked to be in a vehicle with more awesome athletes!  We shared laughs, salt pills and lots of “Swass”!  (That’s short for sweaty….um……you know…….”backside”) 😉  You couldn’t ask for a better day…………..Today though……..I would like to ask for some assistance sitting, standing and going up and down the stairs……….I’M SO SORE!!!! 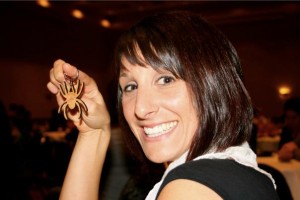 Look at what the girls won! Ha! 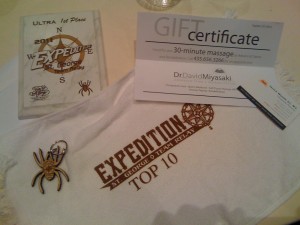 Now the boys cleaned up with awards! Nice! 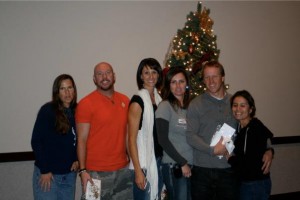 I promise it's the same group of people......We actually have clothes that AREN'T made out of lycra!