“What Doesn’t Kill You Makes You Stronger!”…….or so says Kelly Clarkson…..

I have to admit, the Summer of 2012 has been rough.  Probably one of the roughest I’ve had in my “career” of training and racing.  I can’t really tell you why……well maybe I can figure it out (see below)……..but it has been rough.

After two weeks “off” after Ironman St. George in May, I started a build for Lake Stevens 70.3.  Everyone else who crossed the finish line at IMSG seemed to go into a bit of a slump.  I didn’t!  I was feeling great!  My transition to the 70.3 training went fairly well.  By the time I toed the line in Lake Stevens, I felt ready to go.  Then the worst race weather in the history of the sport (okay…..maybe I’m exaggerating just a little) hit and my race was “okay”.  I accomplished the goal of earning a slot to World  Championships in Las Vegas……..it came with more of a sigh than the exuberance I had hoped for.

Sure!  I had the slot to race.  I didn’t technically “earn” the slot because I got it in the rolldown process (when another athlete who places higher than you opts not to take the slot).  I know.  I know. It doesn’t make it any less of an accomplishment, but I’ll admit.  It kind of felt that way.  Plus, I was feeling tired.  I had the slot and then the realization of all the training I would have to  continue to do came crashing down.  I got home from Lake Stevens and took an entire week off.  Nothing triathlon related!  It felt great!  I LOVED it!  I had a TON of energy and the worst case of dead legs I’ve ever had!

The second week after the race I started to train a bit again.  Coach M wasn’t sending me anything structured but sometimes that’s not good for me.  Even if I didn’t “feel” up to doing a workout……I did one.  It was more obligatory than fun.  I really tried to pretend that it was fun and everything was good………..but the mental slump was REALLY starting to be hard to shake.

This same week, I had to get a “thing” on my foot “taken care of”…….Okay it was a wart!  Not your normal old plantar wart, but a HUMONGOUS MEAN AND ANGRY mosaic wart in between my big and second toes.  This was a first for me.  That sucker hurt!  When I say BIG, I’m not kidding.  It was at least an inch long.  When the doctor is in awe over your wart…….It is not a good thing.  It had been hurting every time my left foot struck the ground for a couple weeks and progressively was getting worse (thinking running on a marble).  Right before Lake Stevens, thinking it was nothing more than some weird blister/callus thing, I headed in to see my favorite doctor, Dr. Yates.  He told me that I would need to “take care” of it after Lake Stevens.  We didn’t need it to get bigger and I wanted EVERYTHING to run without it hurting.  So we made the decision to inject bleomycin (a chemotherapy drug) into it after Lake Stevens.  It would hurt and take about another week before I could run on it, but I could bike and swim.

Let me tell you HOW MUCH those injections hurt!  As if the wart didn’t hurt bad enough all by itself…….the injections were excruciating.  Understand that I have delivered two babies without the aid of pain medication and am known to have quite a good tolerance for pain.  I should have been tipped off when I left the doctors office (barely upright ) with a pain prescription.  I didn’t take any of the pain med (I hate those kinds of things), but I did need plenty of Aleve to take the edge off.  After a few days I was able to squeeze into my bike shoes, but there was no running until the following week…..and it was NOT comfortable.

My friend Sarah Jarvis and Amber Foster and I were suppose to race in a triathlon relay this first weekend of August.  It didn’t pan out as we had hoped and we ended up just having a training weekend in Utah County that was AWESOME!  I got to train with some of my favorite people and in new places.  I climbed Mt. Nebo for the first time and it was BEAUTIFUL!  My dead legs were feeling a bit better (the wart was not) and I was hoping things were going to start to turn around. 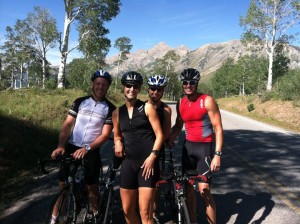 The Summit of Mt. Nebo!

I went back home to my normal routine and now with a World Championship build coming in from Coach M.  My body started to respond much better.  The pain in the wart was getting better every day until I finally couldn’t really feel it anymore.  The injections worked!  Painful……but worked!

70.3 training is, in a word……INTENSE!  The closer to the goal race you get, the more intense it becomes until finally your body is resurrected by the taper.  My body started to cooperate, but my heart just wasn’t as in to it as I wanted it to be.  I was going through the motions.  I was not loving my training.  Everyday it was HOT outside.  Even at 5 a.m., I would open the door to 80+ degrees.  The heat just seemed to zap any energy that I had.  I was alone on EVERY SINGLE training day.  I had recently “swam” with my IPod mistakenly and it was silent these days.  It just seemed like it was always me, my head and the BLAZING sun!

I’ve been trying to figure out what is wrong with my head.  When I step back……it really isn’t that hard to figure out.  I’ve been going full-speed since January of last year (when I ran 4 marathons in 4 months and trained for 2 late-season half ironmans), and on only 2 weeks of actual “off-season” went right into training for Ironman St. George (my first Ironman, nevertheless).  It all becomes clear when I put it down on paper……..BURNOUT!  I think I need a break.  A real break.  The kind of break when you wake up in the morning with no plans and only clip your feet into the pedals if you feel like it.  The kind of break where you meet up with friends for fun rides and runs without expectation of pace, distance or anything structured.

It is interesting, because I seemed to watch quite a few other IMSG 2012 finishers really “drop off the map”, if you will, after they crossed the finish line.  They went into break mode when I didn’t.  I just “pretended” to rest and plowed right through.  It just all caught up with me after Lake Stevens.

-The summer is coming to a close.  It is still hot, but not HOT!  There has been a bit of relief.  That REALLY helps!
-Worlds Championships is only 2 weeks away…….I can do ANYTHING for two weeks, especially when 10 days of that is taper 🙂
-September is filled with FUN stuff.  Bike relay, rest and maybe even a little marathon (without a lot of training) in early October.  Yes!  These things sound fun!  No expectations, just doing what I love to do WITH other people!

So forgive me for a downer of a blog post.  There haven’t been very many posts this summer and I wanted to explain by “absence”.  I am really excited (now that training is coming to a close) to have the chance to toe the line at World Championships.  I’m going into the race with lots of training in my legs and I’m just going to enjoy the few moments that I get to race next to some of the greatest triathletes in the world and along side of my good friend Sarah Jarvis.  That truly will be a treat!

This weekend is my last long workout for this build to Worlds and I will do it at the Utah Half Ironman in Provo Utah.  I figure if I can’t find anybody to train with……I can pay someone for the opportunity 🙂  Let’s just not call it a race though……it won’t be pretty……but it won’t be lonely!

Here’s to the ups and down of training.  These downs sure make the ups so much sweeter!