For the third year in a row, I toed the line for the Utah Half Ironman in Provo.  I kind of jumped in this year at the last minute.  Being in the middle of a build for my final race of the season at the Ironman 70.3 World Championships in Las Vegas on September 9th, I hadn’t really planned on racing in August.  After I saw my training schedule and the fact that Coach M wanted me to pretty much do a half ironman on August 25th, I figured I may as well do it with good friends, a fun course, and spectators……A training day can’t get much better!  So I signed up…….. 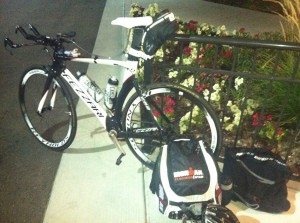 I did fail to mention that physically and mentally I’ve been TRASHED lately.  This final build has been hard for me.  It has been a long season and I’m just plain tired.  After a week of hard, fast miles swimming, biking and running, my expectations for this “race” were pretty darn low…….non-existent actually.  I needed no pressure.  I mentally couldn’t handle it right now.  I didn’t know what my body was going to bring to the table, but I was willing to put myself out there and give it a “tri”……..Pun intended, clearly….. 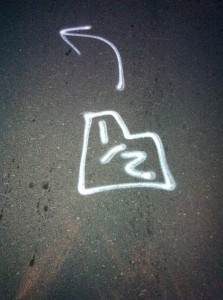 The Utah Half has been my favorite race the past two years.  The first year it was my very first time crossing the finish line of anything longer than an Olympic distance triathlon.  I came in third.   Last year it was an “A” race for me and I brought my “A” game and had some great results AND PRs all while chasing one VERY fast lady.  I came in second.  Yup!  You know EXACTLY what year three brings…………..This should be my year to shed the bridesmaid dress and toss out the bouquet…….NOT GONNA HAPPEN.  I knew that going in and I was okay with that fact (I mean it….cross-my-heart).  It would be nothing short of a miracle if I pulled off a “good” race.  Actually, I shouldn’t pull off a “good” race.  At this point in training my body is spent and ready to soak up all the hard work in a 2 week taper.  Coach M might really question how hard I have been working if things went AMAZINGLY well.  Race day came and things went……..okay 🙂

The water in Utah Lake is VERY warm this time of year and was looking to be in the upper mid-70s for race day.  I figured since I can’t wear a wetsuit at World Championships, I may as well get use to it and not wear one for Utah Half.  I was hesitant.  I’m a pretty decent swimmer, but I would be out there in a swim skin while everyone else was in a wetsuit.  Wetsuits are buoyant and for most people SIGNIFICANTLY faster than your own skin in the open water.  I’m not “racing” right…….swim skin it is! 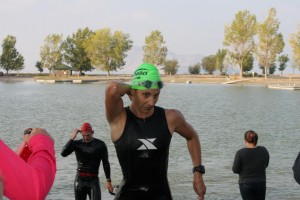 I had the WORST swim time of my ENTIRE triathlon career!  The swim was kind of an odd shaped double square.  The water was murky at best.  You couldn’t see a hand or a foot 1cm from your face.  It was actually creepy how dark the water was compared to when you would turn your head to breath.  Weird I tell ya!  I’ve never been in water like that!  It is not that I felt particularly bad on the swim.  I just wasn’t going anywhere.  My start was a little choppy and clearly I didn’t get out as fast as I usually do.  I had ladies swimming all over my legs and was VERY much annoyed.  I felt like I was swimming pretty well but it was taking a lot of effort.  There was even a point at which I thought, “Maybe I’m having the swim of my life!  That’s why it feels so hard.  Nice job, Colleen!”  Um……No!  Lying to myself may have been the only thing that got me through that swim though.  The swim seemed a bit long and after I exited I forgot to lap my watch into transition.  When I finally did the number on the screen SHOCKED me………I was standing at my bike looking at 40:00!  WHAT THE HECK HAPPENED?  Did I drown for a few minutea out there.  Oh well…….I moved on to the bike.

I ABSOLUTELY LOVE THE UTAH HALF BIKE COURSE!  It is just my favorite.  I tend to do pretty well on these flat time-trial-ish sort of courses.  I even remember one of my first thoughts when I got my new Fezzari T5 Time Trial bike this year was that I couldn’t wait to try it out on this course.  Today was the day. 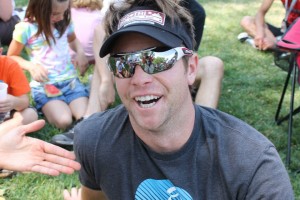 Trent Perry and the COOLEST hair known to man!

My plan for the bike, was to just ride.  Nothing special.  Coming out of the water so slow, I had no idea where I was sitting in regards to the rest of the female field.  I was passing a good number of riders on my way out and could tell I had some work to do to catch up with the ladies.  About two-thirds of the way to the turnaround one of my VERY FAVORITE people Trent Perry road up beside me on his Cervelo.  He quickly passed me and I passed him back.  There was no way a Cervelo was going to win this battle!  Trent and I road for quite a while through the turnaround and back.  I NEEDED Trent right then.  Anything Trent does or says makes me smile.  He reminded me that I was out there for fun.  Good hard fun!  I settled in and started to find some motivation to push this bike a bit more.  I dropped Trent and his Cervelo like a rock when he “thought” he had a flat…….Whatever?!?  The Ceverlo just couldn’t keep up 🙂

Before I had ever seen Trent, I had been riding with another Southern Utah athlete Tom Dansie.  Tom is an incredibly strong athlete and we jockeyed throughout the entire bike.  When I had caught up with Trent (and became a chatter box) I lost him for a bit.  I caught him shortly after Trent’s “phantom flat” and we ended up riding into the finish.  I don’t think Tom understood that he was my comfort on the way back.  I stayed out in front with him safely just behind me.  I was going after some of those girls and was feeling good.  Who cares about the run?  If I’m going to blow up in this race, it is going to be because I HAMMERED (as defined by my tired legs today) this bike.  Tom stayed in my cone of security and we just pedaled away.  There were some pretty lonely stretches on the way back, but Tom was always there.  We even avoided being CREAMED by a motorist who IGNORED a police officer.  Thanks Tom!  You really pulled me through!

Tom and I entered T2 and I let him go do his thing……..That boy can RUN and I wasn’t about to try to keep up 🙂

I started the run and came upon my friend Carlee!  I was so glad I signed up to “race”.  All those friendly faces out there sure made the day SO MUCH BETTER!  I quickly fell into just over 8:00/average pace.  That was all my body was willing to give and all that I was willing to push today.  It would do.

I was feeling pretty good off the bike, just tired.  I knew I would be tired and I just wanted to hold a decent pace and FINISH this darn thing.  Temperatures were absolutely PERFECT for this Southern Utah girl.  It wasn’t too hot and my nutrition was good.

This run course is honestly NOT my favorite.  It is very flat and very shady, but there are some out-and-back stretches that I REALLY dislike on this double loop course.  They seem long for some reason.  I just made it my job to break down this course mentally regardless of how challenging those portions felt.  They were only about a mile each and I just had to compartmentalize each one and then check it off the list.  The sluggishness of the first loop faded to a good steady finish on the second.  I wasn’t going any faster, but I also wasn’t going any slower.  Gotta be happy with that. 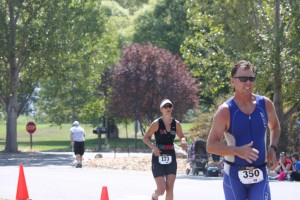 Done with the first loop and look like death warmed over…..YIKES!

It was on the run where I figured out where I was landing among all these AMAZING women.  I was in second (actually thinking I was in third because of a relay team), but there was a girl closing fast and I knew she would pass me before the end.  I was okay with that and actually VERY excited for her to pass me.  She was looking strong and I wanted to help cheer her on to a GREAT finish!  Her name was Tracy and she is a FORCE to be reckoned with.  This was only her second half Ironman and she is a GREAT athlete.  She passed me about 3 miles out from the finish.  I figured I was in fourth. 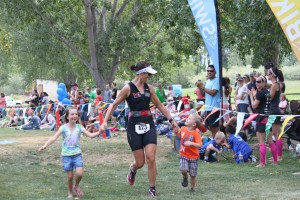 The finish is so sweet in any event, but the sweetest ones are those where I see my BEAMING children anxiously waiting to see if mommy will wave them into the chute to cross the finish line with me!   At the Utah Half…….YOU BETCHA!  Flanked by both of my kiddos we trotted to the finish.  It made for one of my VERY VERY FAVORITE pictures of all time.  Just look at all those faces!  I love seeing them so genuinely happy and I LOVE sharing this AMAZING sport with them.  They are very much a partner in all this craziness that I call my life.  Oh yeah……and it if wasn’t for that INCREDIBLY patient and wonderful husband the kiddos wouldn’t even be standing there and waiting for me with those smiling faces! 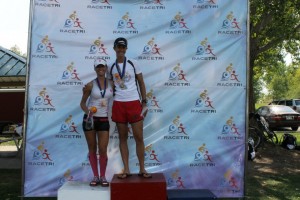 This half ironman will go down as my slowest at the Utah Half.  I’m okay with that (really…..I promise you!).  My body was so tired and my head wasn’t far behind………but somewhere in this race that all became okay.  It became okay to “do my best” whatever that meant.  It meant a terrible swim, a decent bike and a rock steady run.  It didn’t mean a first place trophy.  It didn’t mean a PR for my efforts.  It was just a peaceful feeling that I loaded all my “hay in the barn”……That one of my biggest, most challenging, and most successful triathlon seasons is about to come to a close……….a very big close at the Ironman 70.3 World Championships in two weeks.  That will be little ‘ol me standing next to some of the greatest triathletes in the World on September 9th.  Come what may……..I’m ready to be there.  I’ve earned that right.  Great things can happen! 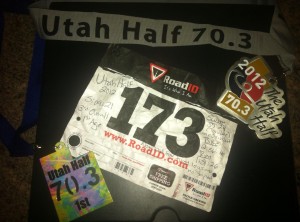 A HUGE thank you to RaceTri and Aaron Shamy!  Two thumbs up on this year’s event.  It was well-marked.  Well supported.  There were more safety officials than I’ve ever seen at an event that made for a seamless transition (except for that ONE truck…..his fault entirely) through the city on the bike course.  Although we started pretty late…..The day was BEAUTIFUL and there was some AMAZING athletes giddy for the chance  to go 70.3! 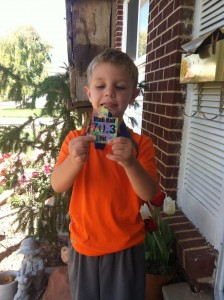