As you all know…..I love racing in St. George!  St. George City and the surrounding towns really do a spectacular job at putting together an amazing racing calendar for us each year.  It has been a long time since I’ve raced the Spectrum 10K.  The last time I did, I believe I was childless and merely engaged to Adam…..so it had to have been at least 7 years ago.  Since then the race course has changed just a bit and there are definitely more people toeing the line. 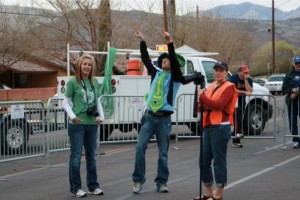 This years race fell on St. Patrick’s Day making it a sea of green shirts, shoes, knee socks and costumes.  It is always so fun to run a light-hearted race like this and was just what I needed after one heck of a training week!   My good friend and training buddy who had been in town all week KILLING me with workouts, encouraged me to sign up.  I have to admit.  I HATE 10KS!  Hate may actually not be a strong enough word………..I truly loathe the distance. 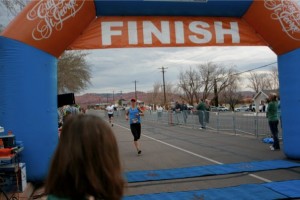 Sarah and I got to the top of the point-to-point race course with about a half hour until race start.  We used the “facilities” and headed out on a nearby trail for a little warm up.  The morning was PERFECT!  Almost 60 degrees with some light wind from the South.  The warm-up felt good and I wanted to stay on the trails all day 🙂  After about 20 minutes we headed to drop our extra clothes in the truck and line up at the start.

The race course descends through Snow Canyon State Park (SPECTACULAR!) and then loops through Ivins City to a finish at the Ivins City Park.  The first few miles are VERY steep downhill.  I was grateful for a decent warm-up as there is nothing more challenging then cold legs running downhill.  Warm legs are much more forgiving and don’t hurt so much the next morning.  The gun sounded promptly at 9:00a and we were off. 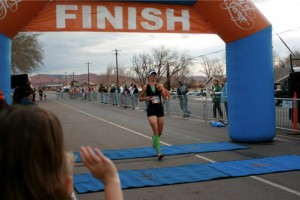 Me and my green socks finishing 5th Overall Female and 2nd Age 30-34!

My goal for this race was to just run.  No plan.  No expectations.  As I said, I was coming off a pretty hard week (actually more than one pretty hard week…..I was in an Ironman slump just yesterday), so I didn’t know what was going to happen.  Early in the week we had a KILLER track workout of 12 miles (track = speed work) that I was sure was still in my legs and I had biked over 180 miles……..did I forget to mention that I swam too 😉  It would be interesting to see what was in the tank today…….and not surprising if there was nothing left.

Sarah blasted from the start and I knew it would be the finish line before I saw her again…….Love that girl!  She is such a GREAT athlete!  I just did my thing through the early descents knowing that most of the crowd was going to die off at the halfway point because they would be burned out.  I was right.  Everything started to get thin as we came to the first aid station.  I was working my way through the women and most of the people around me were men. 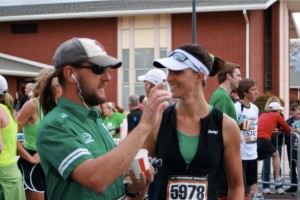 I decided not to bring my “blankie” for this race………I mean my Fuel Belt.  I have a strange “need” for my Fuel Belt when I run.  I pretty much never leave home without it.  I’m trying to get a bit more comfortable with aid stations during shorter races (you would think after all these years this wouldn’t be a problem), but I usually just bring my own support so I always know I have what I need.  Today, I decided I would be fine and worst case scenario……I could run the entire thing without water.  I took a cup at each of the two stations and had enough to wet my dry mouth.  Perfect!  No need for “blankie”…….I survived just fine without her.

By the halfway point, the course is out of Snow Canyon State Park and turns back towards the Ivin’s Red Mountain and Tuacahn Amphitheater.  As we ran through some neighborhoods, the terrain flattened out and climbed just a bit. After all the steep descent…….it is hard not to notice when you are “going up hill”.  My pace slowed, but I was still plugging along at a strong pace.  I was trying not to be too concerned and I knew that I was running sub-7s and was still feeling pretty good……..well, let’s put it this way………my legs hadn’t shut down yet. 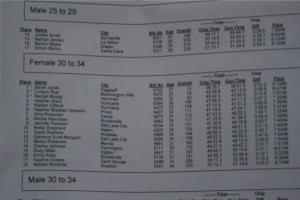 I do have to admit how nice it is to run such a “short” race!  With Ironman training, your perspective on distance changes quite drastically.  Just doing a long workout with a single sport is like a treat.  Doing only 6 miles of a run is, quite frankly, ALMOST A VACATION!  Before I knew it, I was rounding the final descent to the finish line.  5th Female Overall and 2nd in my Age-Group (30-34).  I was even taking home a new 10K PR of 42:06 (6:47/avg pace).  I have to say I was pretty happy with that.  Sarah was amazing and finished 2nd female overall and 1st in our age group. 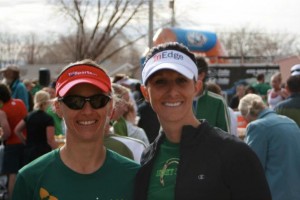 Sarah and I both look a bit "off" in this photo......We don't know what to do with ourselves after just 6 miles of running. 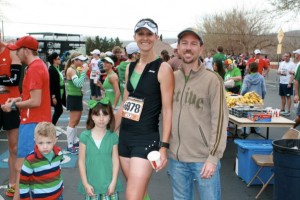 The Rue Family! The kids are having a BLAST! 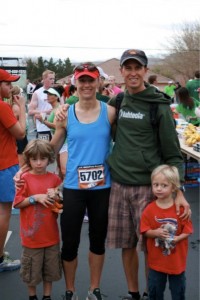 The Jarvis Family! Apparently Max and Noah are loving it too! 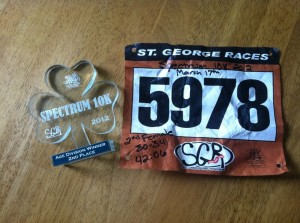 After collecting our over-sized Shamrock trophies, Sarah and I were off to the pool to round out the workouts for the day and close out the week.

Big thanks to St. George Races for putting on another STELLAR event!  Next up………Leadman 125 Triathlon in Las Vegas on March 31st.  My teeth are chattering just thinking about that COLD water 🙂