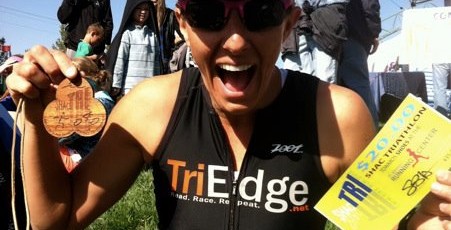 When Coach Heath comes to town you never know what to expect.  On Thursday he called me letting me know he was coming down and wanted to race the Spring SHAC Sprint Tri.  I thought GREAT!  I’ll get you signed up and have you all ready to go.  I had a  long workout on the schedule and figured we would all just be doing our thing.  HT Athlete, Tony, was also joining Heath and had a long workout to accomplish as well.  Three athletes, three different Saturday plans………until Heath got a bright idea.  I honestly think he didn’t want to be lonely and called me Friday late morning stating that he thought it would be a GREAT idea if we all raced.  Since I’m a glutton for punishment, I agreed.  Tony wouldn’t get the news until the evening 🙂 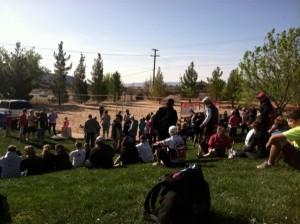 Beautiful Day for a Race!

So Saturday night was spent picking up packets and prepping for another epic-kind of Saturday.  The plan was to race, then head out for the rest of our workout, a long bike and run.  We are Ironmen……WE CAN DO ANYTHING!  Ha!

I have raced SHAC 3 or 4 times before.  I enjoy the course and being able to support another GREAT St. George event.  With 130 miles of biking on my legs and about 7000 yards of swimming in my arms, I knew that I wasn’t out for a PR, but just a good intense workout.  Sometimes I swear it takes more out of me to go short and fast, than long and moderate.

We got to the Sand Hollow Aquatic Center just after 6:00a and the place was already packed.  We quickly set up T2 and T1 so we could get inside and get warm.  The morning temps were about 38 degrees.  That makes for some pretty cold conditions to be running around outside with no shoes and clothes on!  I have always raced this event with a long-sleeve jersey on the bike, but realized I had TOTALLY forgotten it today.  Luckily, Heath had a jacket that I grabbed as soon as he took it off his body.  I didn’t care what it was or what it looked like, I was in NO MOOD to freeze on the bike. 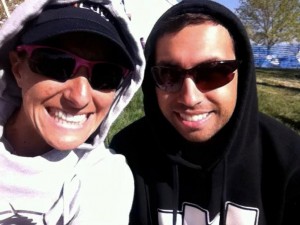 The SHAC "hoodlums"! You ROCK Tony!

The start is always a bit chaotic……Well…….that may not be the right word. It is “boring” chaos.  There are only about 24 spots available to swim and everyone else just stands in a line and waits for a lane to open up.  This makes it so you have no idea who you are competing against.  The last person in the pool is usually almost an hour to an hour and a half after the first athlete hits the water.  It took us about 35 minutes before we were in the pool.  I had the pleasure of swimming in the lane that was right next to the line of waiting athletes.  There is nothing like swimming with 100 or so pair of eyes looking at you every time you take a breath on your left side.

I totally forgot to start my watch when I got in the pool.  I think it was off by about 50 yards.  I felt pretty good in the swim and was quickly out of the pool and on my way to the frozen tundra…….I mean T1 😉

I’m very familiar with this bike course and I actually really like the rolling terrain.  The bike consists of a double loop.  The way out has a bit of climbing, but you get some nice speed on the way back.  Because of my AMAZING technical turning skills I tend to lose a bit of time with the two turn arounds and the hard lefts and rights.  I really need to get better at those.  My bike felt good.  I had tired legs going in, but they came out to play for a little while.  I felt strong and steady.  Nothing over the top, but it was solid.  I was sure it would be a good bike time for me. 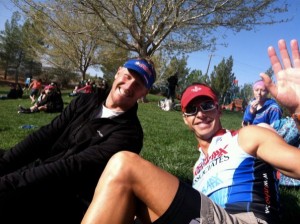 The one thing I love about this course is all the people you get the privilege of passing.  There are PLENTY of rabbits to chase.  It makes it interesting.  This event draws in a large crowd of beginners (which is AWESOME), so some of the passing can be a little sketchy as people learn the ropes of triathlon biking.  I will admit that I get a little bit ansty with my “on your lefts” towards the end, but it is all in good fun.  I was lucky enough to be close together with another HT Athlete Matt Wooley.  Matt is a strong biker and we went back and forth for a bit.  Me taunting him with being chicked 🙂  I love riding with the boys.  He beat me in with a GREAT bike split, but I wasn’t far behind.

As I finished up the bike leg, I WASN’T freezing and was grateful for the extra layers I had (ear warmer, toe warmers and Heath’s jacket).  Into T2 for a quick shoe change and I was off.

My feet were cold and my shoes were floppy.  I had to stop right out of T2 in order to tighten my quick laces or I was going to be in a mess of blisters.  This took longer than expected since I had no dexterity in my chilly fingers.  I couldn’t even grab the laces.  I felt like I was all thumbs.

The run was my nemesis today.  If you’ve been following along with my blog you know I have been having some foot pain in my right ankle.  It doesn’t really bother me except for when I run (well, duh!).  After the first step…..I knew it was going to hurt (this would throw a wrench into the entire day).  I ignored it and headed out on the trail for a double loop run before the finish. 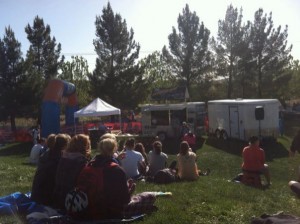 I felt decent on the run, but knew I wasn’t quite getting the speed that I usually do.  Whether due to the ankle pain or the tired legs, I wasn’t quite as zippy as I would like to be, but I was okay.  Not bad.  I stayed in my head and just told myself to make it hurt and it would be over soon 🙂  I was just grateful to not be repeating the AWFUL race I had at the November SHAC when I had my WORST TIME ever!

Before I knew it I was descending back to the pool and turning onto the dirt to the finish.

My time was good enough for 2nd female over all (13th including males) and 1st in my age group.  I was BLITZED by some amazing woman from Montana who I think set a new course record with a 57:13……My hat is off to her……Though, give me a pair of fresh legs and a day or two of taper and WATCH OUT 😉  Ha!  Maybe next time.

Heath put in a impressive performance for a 51:51 which I’m pretty sure is a new course record.  Tony wasn’t far behind cursing Heath the whole time for making him race and plotting his call to Mahogani 🙂 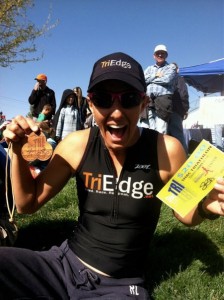 Now that is a NICE Race Kit 🙂

The only negative comments I have about this race are the crazy swim starts and the awards ceremony.  There may be some other options to starting and executing this swim (serpentine) in the future that may help with the flow of athletes.  They wouldn’t have to start the race so early in the cold morning and the finish times would be closer together (better for awards).  With the way this race starts, the last person in the pool could potentially win, so I understand some of the delay of not being able to crown a winner until the last person crosses the line.

Unfortunately we didn’t leave the race venue with Heath’s overall award until almost 11:00!  By that time we were done.  We wanted out.  They had drug it on long enough and we had hours more work on the schedule for the day.  I was also a bit disappointed that the only overall recognition was for 1st place.  Everyone else just fell into age group.  That means not as many awards to go around.  Had I received an overall award along with the third overall female…..there would have been two other people receiving recognition in the age group category!  I’m all for as many people as possible being recognized!  Not so sure why they did this, but it seems to be a new thing for St. George City, so I will just start to expect it from now on. 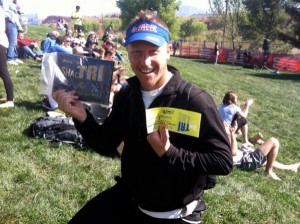 And the New American Course Record goes to HEATH THURSTON!

All-in-all I’m pretty glad Heath talked me into racing.  It was a good challenge and its always more fun to race!  Thanks St. George City for another GREAT event!  Until next time……..