Back in May the week after Ironman St. George, I jumped on the “Gluten Free” (GF) bandwagon.  Why?  A couple of reasons:

1.  Even though there is no science to show that an otherwise healthy athlete benefits from a GF diet, there are plenty of antecdotal evidences of athletes saying how much better they feel eating GF.

2.  It definitely wouldn’t hurt me not to have access to all the breads, cereals and cookies that I can’t help but overeat.

3.  I needed a nutritional change.  Ironman made me feel like I was just gaining more and more weight due to the demand of my training and the appetite that came along with it.  I’m a sucker for anything that makes me lean, mean and FAST!

So there it is.  Nothing special.  I have no digestive issues that plague me when I train and race.  There is nothing to indicate that my body “needs” to be GF.  I just wanted to give it a try.  So I did……………AND I LOVE IT!

My version of GF is not strict as far as items that are gluten free but may be process in plants or factories that also handle gluten containing items.  I don’t worry about trace amounts of gluten found in some dressings and other items like that. I also try to stay away from GF versions of “normal” items, like breads, cakes, cookies and such.  They are just as processed as the gluten version and really don’t offer any nutritional benefit.  I try to eat lots of gluten-free grains (oats, quinoa, rice, corn), fruits and veggies, nuts, plenty of lean proteins, and dairy in the form of Greek yogurt and cheese.  I can get plenty of carbs.  Basically, eating GF keeps me eating fresh and far less processed food.

When I started down the GF road, I thought it was going to be really tough.  I like bread in all it’s forms.  Was I going to be destined to deprived, carb-less life?  I have to say I was pleasantly surprised!  Even my first trip to Pizza Factory (one of our family’s FAVORITE pizza/salad bar joint) was okay.  Though I can’t eat the breadsticks, it wasn’t as bad as I thought it would be.  I actually don’t find myself even wanting the gluten containing items………most of the time………I’ve had a few moments, I will admit 🙂

It has been over 10 weeks since I’ve eaten gluten (okay I admit to a crouton or two that slipped by on a salad and 2 pieces of regular pizza after Lake Stevens 70.3 because I had eaten all the gluten free items I could find and I was going to pass out).  I have to say I feel GREAT!  There has been no magical transformation in my training and my speed.  I just feel good and strong.  My conclusion……….I’m eating better!  Less processed, more fresh, and less crap than I would usually binge on.  Believe me, there are PLENTY of gluten free items that are naughty enough to handle the cravings (think M&Ms, chocolate chips, rice krispie treats, ice creams….etc).  Luckily, those things aren’t necessarily my favorites, though I’ve polished off my fair share of bags of chocolate chips in the past.  Ha!  I’m not eating all those extra carbs that I don’t need.  I’m getting plenty of carbs from other sources and the reduction of gluten has not effected my energy output in the least.

How can you resist all this COLORFUL goodness!

I would like to report that the scale has steadily been dropping, but alas, it hasn’t.  It hasn’t changed at all……I’ll take that as a positive thing 🙂  I haven’t had a BodPod (body composition test) done since before Ironman, so I’m due for one.  I will be interested to see if there are any changes as far as my lean mass.  Of course, all the changes can not be conclusively defined as nutritional.  My training this summer has been very different than my Ironman training in the Winter and the Spring.  That needs to be considered as well.

If you are thinking of going gluten-free, I say to give it a try.  There is nothing wrong with paying more attention to what you are putting in your mouth and making sure that your nutritional choices are as sounds as possible.

Here’s to being gluten-free!  It has been good to me so far and I plan to continue……..I don’t see a reason to stop.

Sidenote:  After I wrote this blog I stumbled on this article and it is exactly what I’m thinking.  Do whatever makes you eat well! 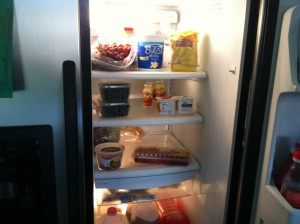 My Gluten-Free Fridge (except for that bread for the kids)!