Bringing it all Together – The Utah Half 2011

The best taper I have ever participated in began the weekend before the BIG Utah Half race.  I have never in my life been so grateful to taper.  I had worked hard in the weeks leading up to this point and was ready for the change in pace and was definitely ready to race.  My training had been solid.  I was hitting the workouts and following everything Coach M could dish out. 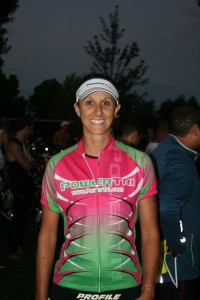 So nervous I could probably throw up, but I'll smile because of this AWESOME PowerTri jersey!

As I compare my training this year to last year (without coaching) there are some HUGE differences.  I may be putting in similar mileage, but in different doses and patterns.  Last year I had done so few bricks (back-to-back workouts, like swim/bike or bike/run…..typically bike/run) that it would take one hand to count them.  This year my schedule was loaded with them.  At least one if not two or three each week.  When training myself I ALWAYS would over-distance a race.  With Coach M, that rarely happened.  I put in plenty of 10 mile tempo runs and bike rides of 40-50 miles, but there was no over-distancing.  Even with those differences there was one MAJOR change in my training this year than last year……….Speed!  My limits were pushed weekly, whether on the track, a long tempo run or intervals on the bike.  The speed work came in a variety of different packages, but it was always there.  I could definitely feel it in my running.  I had never run so fast in my life.  Tempo workouts were like track workouts.  Miles and miles of intervals and paces.  I rarely ran under 10 miles and rarely biked without a plan for pushing intensity.  I knew I was getting faster and stronger.  I could feel it all over my body.

With all of my training, I didn’t suffer from an injury (knock on wood).  In the past when I would really push, I would end up with some sort of overuse injury or something that would slow me down and threaten to railroad my training.  This year……nothing.  Yeah…..Maybe an ache and pain or a sore spot, but nothing that slowed me down.  I definitely praise my training plan for this, but also the amazing deep tissue massages I get weekly from none other than Adam Byington of Essential Massage St. George.  (Seriously!  He’s AMAZING!).  I felt great.  I had confidence.  I was ready to race. 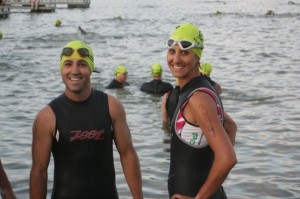 Craig Coats and I right before the start.

The entire week leading up to the race I was nervous.  I had high expectations of myself and didn’t want to disappoint after such a great finish last year (3rd female overall).  I knew that the race would be challenging, but I knew I could do it.  I just didn’t know how well I could do it.  Little doubts would creep in here and there and I would wonder if my training had been enough.  Had a done long enough workouts?  Was I really ready to peak and race well?  Peace and serenity came as I got to Provo/Orem and got to see and chat with my coaches.  They knew I was ready and in the simplest phrase from Coach H just before race start – “Trust the training.” – I KNEW I was ready.  Those words hung in my ears…………

I dove into the murky Utah Lake and couldn’t believe how warm the water was.  Elites were not allowed to wear wetsuits due to the temperatures and because myself and only two other Elite females were racing, they asked us to start with the Age-Groupers.  I happily obliged because I really wanted my wetsuit.  My swimming has been solid lately.  I’ve been in the open water at least weekly and feel like my technique and speed was really starting to become more efficient.  As we started, I felt strong.  I held a good line and found myself out of the traffic of most of the other athletes.  With a double-loop course, I knew that traffic would be more of an issue on the second loop (and it was), but it was never too bad.  I came out of the water (well slipped my way out of the water of the mossy boat ramp) with the top 7 women.  A good place for me to be……30:37 (including the long run to transition) 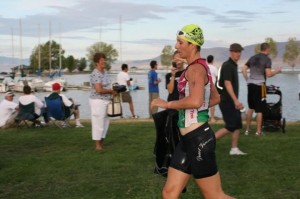 How far am I suppose to run barefoot and carrying this wetsuit?

I quickly stepped aside and stripped my wetsuit due to the fact that the run to transition is REALLY long in this race.  Definitely a few hundred feet.  I didn’t want to fight with a drying wetsuit, so I ditched it as quickly as possible.  I was in and out of T1 in a flash.  I believe my fastest T1 to date……..:40…….Yes!  FORTY SECONDS!  I surprised myself on that one 🙂  That’s what you get with good transition set-up!

I was on to the bike.  I came out of transition with one of my main competitors, Kara Bankhead.  She’s an AWESOME athlete, who I knew would be hunting me down on the run, so I had to get some time on her on the bike.  I passed her and all the other females quickly and caught up with the leading female, Jeanette Schellenberg.  Another great athlete, Jeanette and I stayed together for the majority of the bike.  We both had the same goal of getting as much time on Kara as possible.  Coming out of the turn-around and as we headed back, we rounded a corner together and my flask of nutrition popped out of my jersey pocket.  In that split second I knew I had to go back for it.  The flask was full of 400 calories that I was going to desperately need to get down before hitting the run.  I swung around and watched Jeanette speed away.  I recovered the flask quickly and set back onto catching up the time I lost.  It took a few miles, but I finally managed to be back in place with her, both of us crossing into transition at essentially the same time.  I finished with the first female bike of the day at 2:22:04 (this course was roughly 52.5 miles, rather than 56). 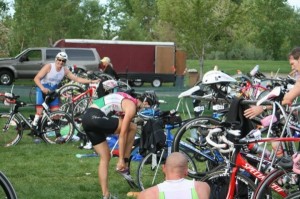 With only :40 in transition, I'm surprised a picture was even able to be in focus!

After another quick transition we were off and running.  Jeanette exited transition just a second ahead of me, but it was clear that her running pace was going to be faster than mine.  T2:  :51.

I made the decision early on to just let Jeanette go and run my own race.  There was no need for me to waste my energy chasing her.  I needed to stick to my plan.  Coach M had mapped out goal paces for me for this half-marathon.  I was to start about a 7:35 and pull it down to the realm of 7:15-7:25 after a mile or so transition.  I was starting out fast, under 7:00 and needed to settle down to find my groove.  It was hot by this time and I knew that temperatures were not going to be in the 80s much longer (we topped out about 95 degrees).  Electrolyte supplements and water would be my best friends! 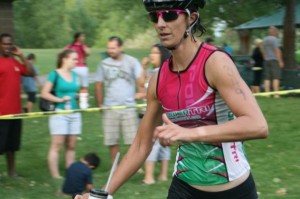 Though the Utah Half run course is flat, it can be mentally challenging.  The run consists of two out-and-back legs on a double-loop course.  The majority of the course runs on a bike path that is heavily wooded and, for me, impossible to tell where you are in relation to the finish.   I just relied on my Garmin as my guide.

My pace was holding around a 7:30.  At each out and back I had the opportunity to see how far ahead Jeanette was and how close Kara was getting.  I just had to stay the course and run my race.  One of my main goals for this race was to feel good on the run.  I wanted to finish without feeling hammered.  I wanted to be able to do more than just survive.  I was doing just that.  Coach H’s words were at the forefront of my mind.  “Trust the training.”  I knew that I had run so many 10 mile tempo runs that this was “old-hat” for my body.  It had been trained to run fast at the end of a hard workout.  This was not new territory, I just had to stay sharp and focused and finish. 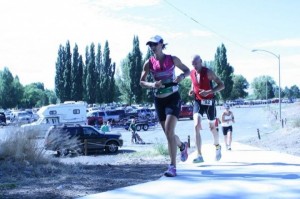 Finally passed the guy in the red on the second loop.

On the last out-and-back, I was still sitting behind Jeanette, but not losing time.  Kara had not passed me (which was shocking), but I got a glimpse of her.  She was there and she was close.  The final stretch was roughly two miles and I knew that I just had to run it in.  I didn’t do anything crazy……I just ran and ran hard.  I was feeling like I may be starting to need more electrolytes, but I was out (and had consumed about 13 or 14 pills already over the course of the race).  I had a final GU and pressed on.  Luckily, those two miles went by quickly.  I was out of the trees and rounding through the parking lot to the finish before I knew it.  A solid second place.  I was done!  1:37:15. 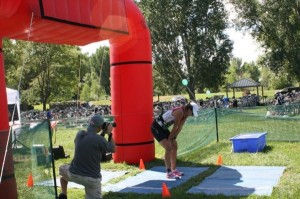 My typical pose immediately after crossing the finish line. To all the volunteers: Yes, I'm fine. I just need to stop running for a minute 🙂

I ended up roughly 3 minutes behind Jeanette in a very happy second place.  I had just run a 1:37 half marathon and I was ECSTATIC!  Even figuring in the short bike course, I would have been just under 4:45……..My ULTIMATE goal for this season.  I remember back in December setting myself a goal of a 4:45 Half Ironman and thinking how unattainable that seemed.  But it wasn’t.  It was there.  I did it!  Every mile I had trained…….Every interval I had cursed……It all paid off and in a HUGE way.

Will this be my best race?  I hope not.  I feel like I’m just beginning to tap into potential that I didn’t know existed 6 months ago.  This all may seem self-absorbed and trite to some, but I have never enjoyed the sport of triathlon more than I have this season.  I’ve had to grow up a bit.  I had to learn that not every day will be great, but that great training CAN and WILL pay off.  Maybe not every race, but it will with a little patience.  I don’t do any of this to prove anything to anyone but myself, but I hold myself to a high standard. 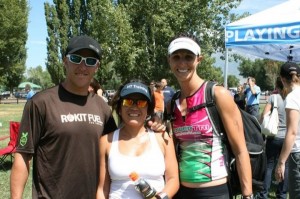 The 2011 season is almost in the books with only one more race on my calendar for September in St. George.  Kokopelli will be short and sweet (olympic distance)and a fun way to close out a GREAT year on my home turf.  So what’s to come……..That seems to be the question.  Since I’m not planning on expanding our family anymore, there will be no long layoffs.  I’m now fully invested in my training.  Luckily my husband is as well and we go forward as a team.  Fall is coming and so is the off-season, but I think it’s decided that off-season will be a bit short and new adventures will be on the horizon.  Call it crazy….. because I definitely am……but I’m in for Ironman St. George 2012.  I’m scared to death and I may deny it if asked, but I guess it is only logical………Plus, Adam will kill me if I don’t……He’s getting very tired of being asked why I haven’t done the race already. 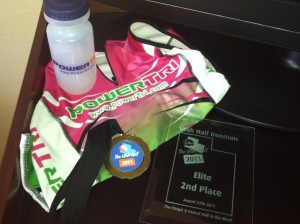 Special thanks goes out to my sponsor PowerTri, my AMAZING coaches Mahogani and Heath Thurston of HT Training, all the athletes of the Southern Utah Triathlon Club who made the Utah Half SO MUCH FUN and especially to my husband…..I don’t think any wife has a cheerleader like I do 🙂

Here’s to Fall…….the best time of the year to be an athlete! 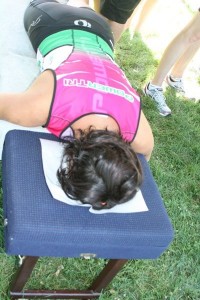